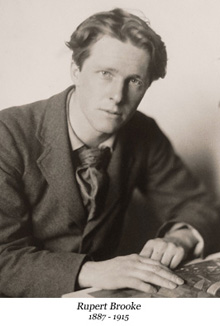 Welcome to the Rupert Brooke Society.
We are a non profit-making organisation that exists to celebrate and promote interest in the life and work of Rupert Brooke. The Society welcomes new members; you can join through this website. For further details please visit our membership page.

Rupert Brooke has continued to fascinate people of all ages and walks of life ever since his untimely death en route to Gallipoli on St. George's Day 1915, at the age of 27. He lived his short life with intensity - he was not only a poet, but also a scholar, dramatist, literary critic, travel writer, political activist and soldier. Brooke had a large circle of friends, many of them leading figures of their generation including Virginia Woolf, Winston Churchill and W. B. Yeats.

Today Rupert Brooke is probably best known as one of the famous War Poets of the First World War (Wilfred Owen, Siegfried Sassoon, Isaac Rosenberg etc). He was the first of the poets to die so he never experienced the horror of trench warfare as Owen and Sassoon did and therefore his famous Five War Sonnets, which include 'The Soldier', reflect the romantic, patriotic mood that was shared by most of the country and, indeed, Owen and Sassoon at the beginning of the First World War. This sentiment made him the voice of the nation at the time of his death but in more recent years has led to Brooke's work sometimes being unfairly dismissed.

During his lifetime Brooke was admired for both his brains and beauty. He possessed a quiet personal charm and magnetism along with golden classical good looks - Yeats once described Brooke as "the handsomest man in England". These assets combined with his talent, passion and energy meant that most who met him fell under his spell.